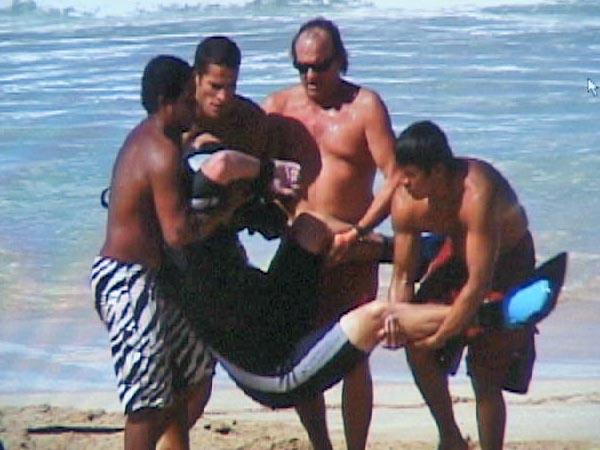 On December 31, 2002, Ray Hollowell, founder of Sea Inspiration, was in the water filming the world’s best surfers at the notorious Banzai Pipeline on the North Shore of Oahu. The Pipeline boasts some of the most dangerous waves in the world.

Ray was filming with his friend, legendary water cinematographer, Larry Haynes. To get the footage they wanted, Ray and Larry had to swim deep in the impact zone where the waves exploded on the shallowest part of the reef.

At 12:15 pm, Ray saw a big set on the outer reef marching towards shore. He was deep in the impact zone and unable to escape the first wave of the set that had about a 20’ face. He was vaporized on the reef and tumbled underwater like a rag doll in a washing machine. When he re-oriented himself and popped back up to the surface for air—there was a massive wall of white water coming toward him.

The wave slammed Ray head and shoulders first into the reef and knocked him unconscious. After three more big waves steam rolled over the reef, Larry saw him floating face down in the “death position” with his camera a few feet away. Thankfully, Larry, with the help of several pro surfers like Raimana Van Bastolaer and Sylvio Mancusi, and fellow water cameraman Hugh Gentry, they were able to pull Ray to safety. Here North Shore lifeguards Fred Asmus and Tau Hannemann, along with Honolulu firemen and paramedics were able to revive and transport him to Wahiawa General Hospital where he was in ICU for nine days. Even with a helmet on, Ray sustained two brain contusions, a collarbone broken in four places, two broken ribs, a torn rotator cuff, a bruised lung, and chemical pneumonia.

See footage of the incident and interviews about it in this news clip.

Needless to say, Ray is forever grateful to everyone that had a hand in saving his life. Though injured by the ocean, he was given a new lease on life and vowed to become even more active to help the marine environment that he loved so much. His brush with death in the ocean gave him a new perspective, helped him see the sea in a different way, and ingrained in him a deeper respect and appreciation for it.

Ray spent the next year re-gaining his strength and making a plan for the sea. As soon as he was able, he began filming again. His focus, ever more on the beauty of the marine environment and the variety of wildlife living within it...the things he’d have lost if he’d not made it through his ordeal. Ray began developing ways to help steward the marine environment he had such passion for. He realized that his experiences in the water helped him heal: emotionally and physically, he felt better after each episode in the ocean water. This was where the idea for sharing healing sea experiences began!

His accident renewed his focus to document and share the wonder of the marine environment—and also help people see the inspiring healing that the ocean can offer by sharing video of the sea adventures he facilitated.

In 2009, he formalized his ideas into a nonprofit called PlanSEA.org—now renamed Sea Inspiration—with a mission to help people and oceans heal together. The rest, as they say, is history!

Learn more about who we are!